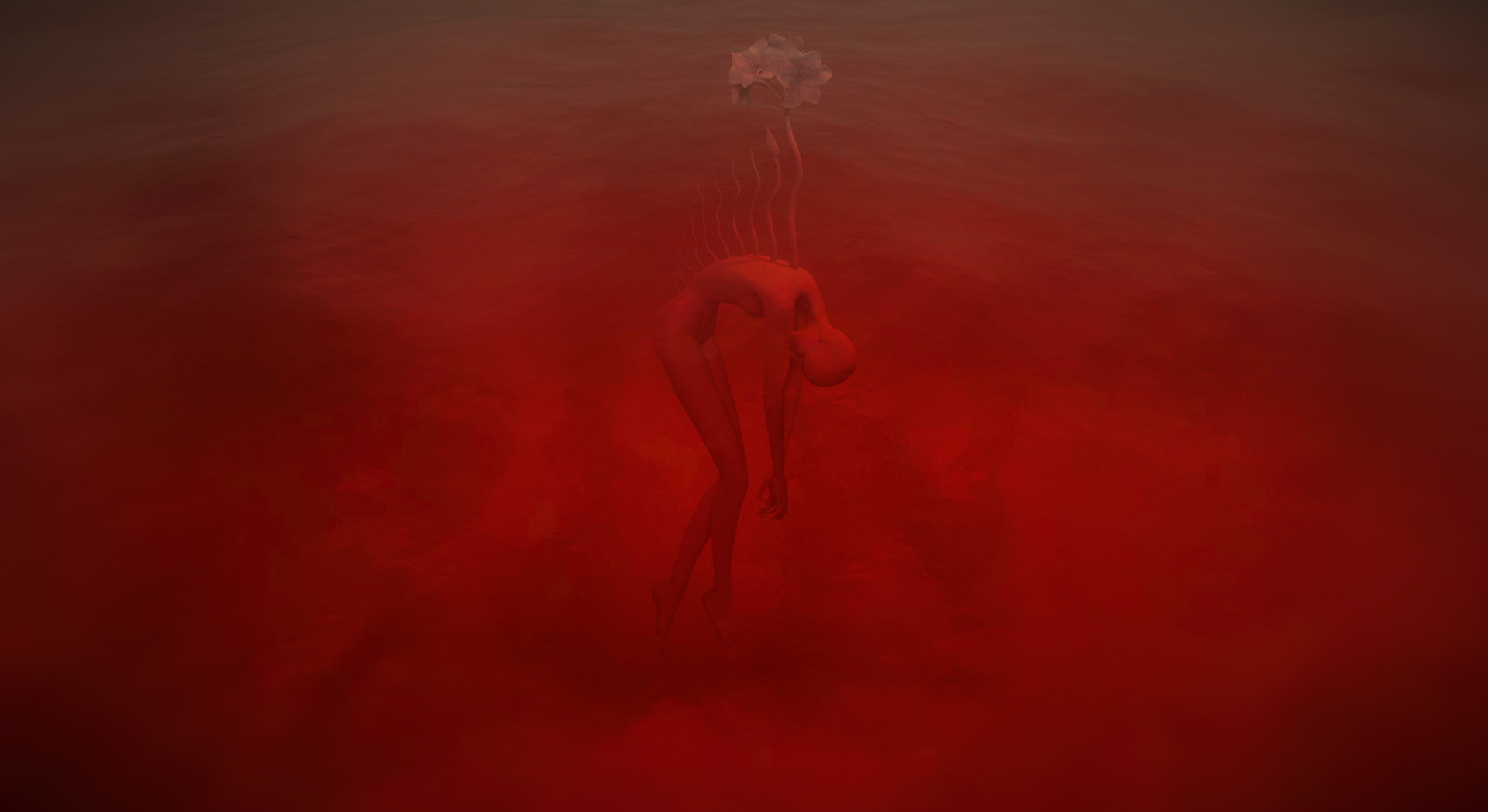 Amaryllis is a room-scale VR art installation, created by Danish-Armenian artist Mariam Zakarian.
Early versions of the piece have been exhibited publicly since mid-2016 and the first completed scene, Ocean,
is exhibited internationally since its Danish premiere in August 2017.

It has been argued that death, life, and what lies beyond, are all products of human imagination. That existence is nothing but a dream, a simulation of the mind and a permanent hallucination. It is then perhaps not so strange that one’s senses can be deceived so completely by the latest developments in technology that the physical body reacts involuntarily and with great conviction.
Amaryllis is a virtual reality art installation exploring how immaterial, virtual art can become profoundly physically and emotionally affecting.
It is composed of several worlds, each carrying a particular emotional context though the use of symbolic imagery, music composition, sensory narrative and interaction. The barrier between physical and immaterial is challenged as the surreal becomes lifelike, inspired by details, shapes and processes from the organic, natural world.
The project was named after the Amaryllis flower, whose intense, red color appears in all of the pieces belonging to this body of work. At its core, Amaryllis is the artist’s attempt to understand if the alien, artificial language of cutting-edge digital technology can be used to share uniquely human concepts such as longing, healing and loss in a more direct and personal way than in other media.
The VR installation uses the room-scale system of the HTC Vive, which enables viewers to walk physically in the interactive, virtual world. The concept is expanded in several other media, including analog art rituals and performances, which prepare visitors for the transition to VR.
Apply for license to view, review or exhibit Amaryllis VR : Ocean

The first chapter of Amaryllis is “Ocean” – a piece about cleansing and an entry point to the digital world. It swells and swallows the visitor continually, welcoming them to a space of contemplation and catharsis.
“Ocean” was inspired by the mythical river Lethe, whose waters can wash away memories and sins.
Before entering “Ocean”, guests are recommended to participate in the analog art ritual “Tea with Amaryllis”, which may amplify the experience.
Acrylic and oil paintings, and color pencil drawings for “Ocean” are exhibited alongside the VR piece at select venues and events. These are available for purchase
Click on the images to play animated screen captures from the VR piece "Ocean". 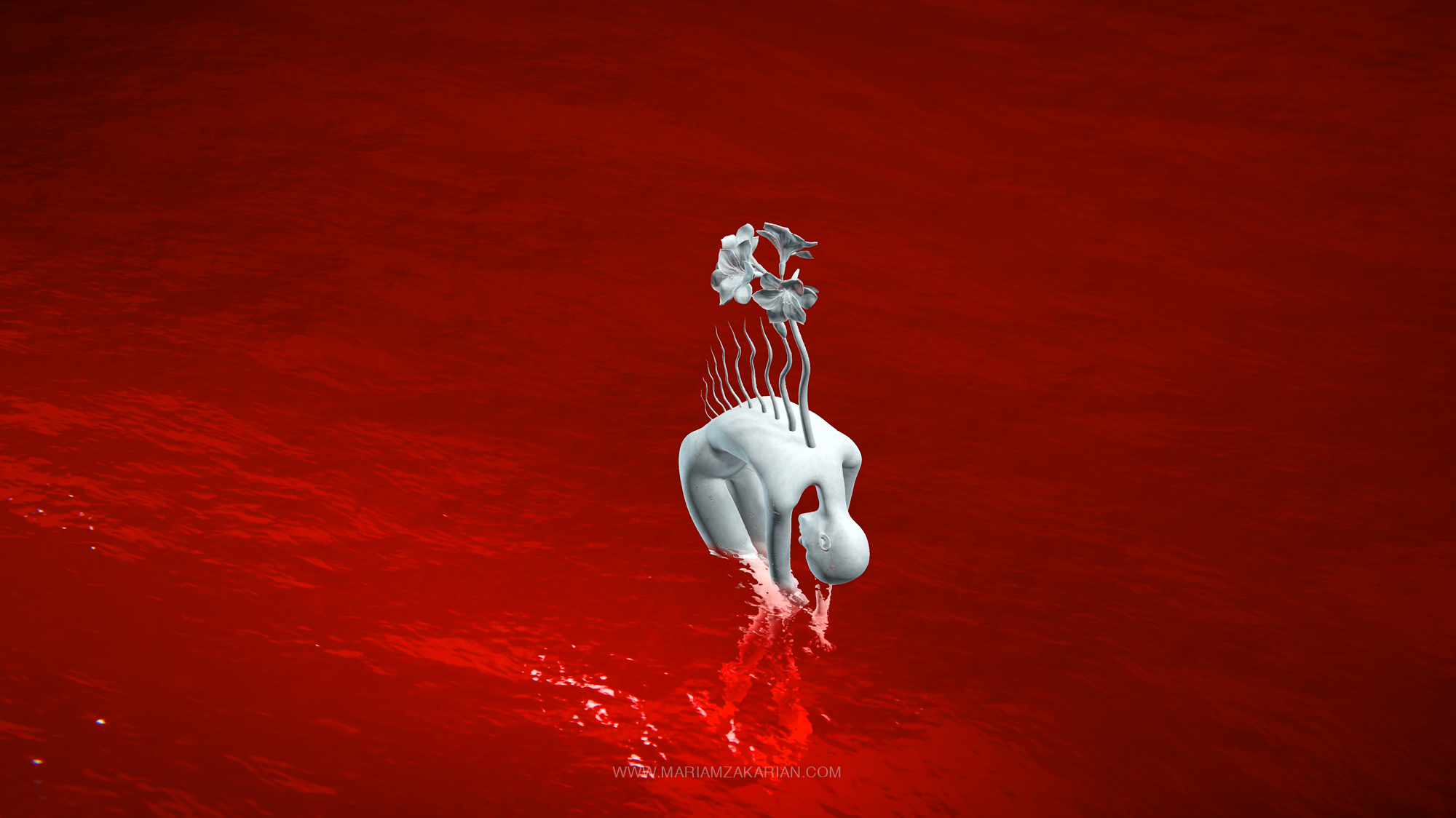 "Tea with Amaryllis" is a participatory art piece functioning like a cleansing ritual.
It relies on the audience to give up a very personal piece of themselves.
It's about trust and vulnerability, and about the age-old wisdom that by performing concrete, symbolic gestures, we may be able to process negative emotions more easily.
In the ritual you are asked to think of a memory, feeling or thought that is painful to you, to concretize it into 1 sentence and to submit the sentence anonymously to a black teapot, thereby symbolically discarding it forever.
This collection of discarded words then becomes an ingredient for a special tea, that is fed to a white Amaryllis flower during an art performance.
A time-lapse video of the white flower growing and blooming is filmed and created, documenting the change.
Nature is very good at converting pain to beauty.
With this ritual, we hope to do the same. 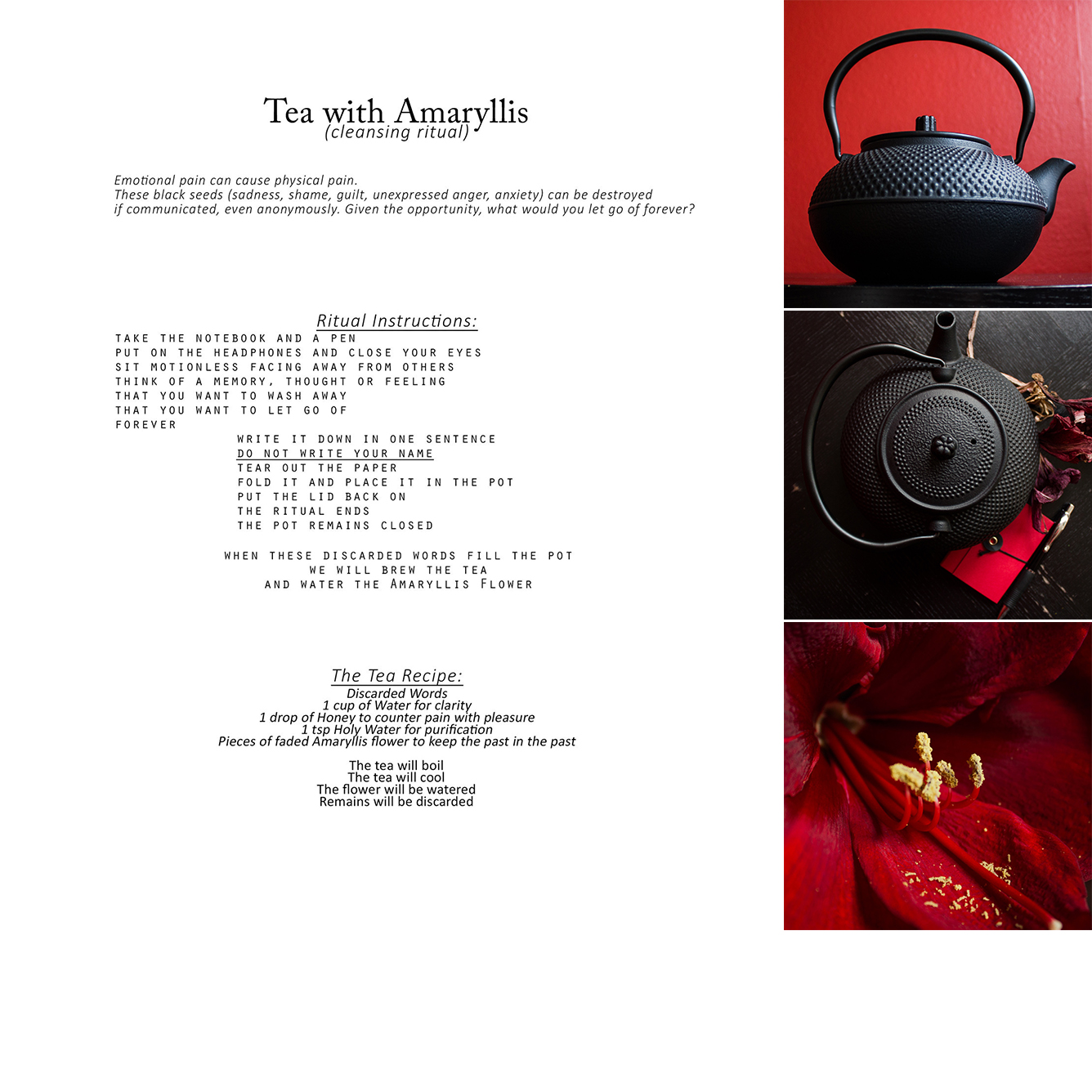 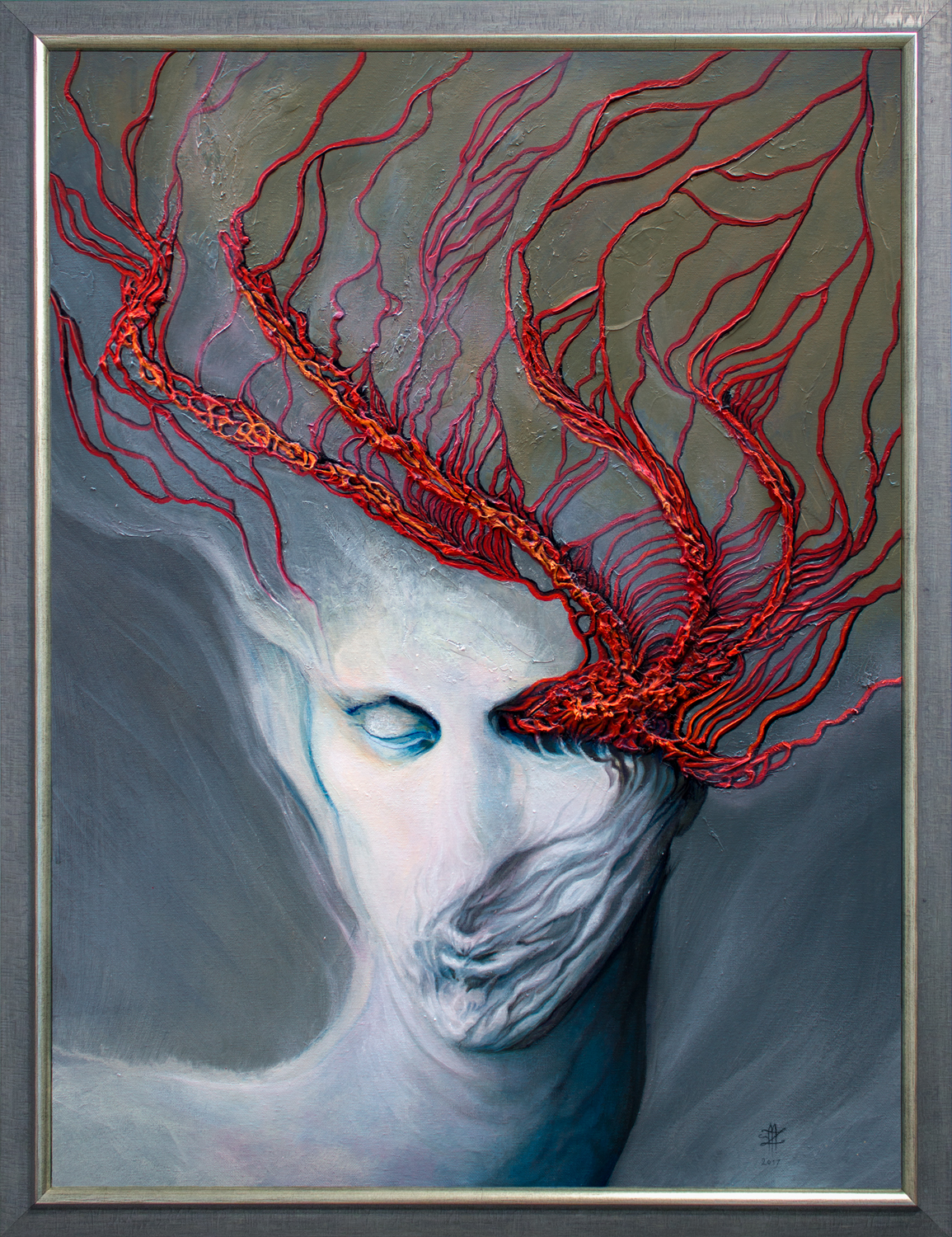 Acrylic and oil paintings, and color pencil drawings for Ocean are exhibited alongside the VR piece at select venues and events.
These are available for purchase, as is the VR installation. Inquiries may be sent via the Contact page.

Limited edition giclée prints of the artworks are sold online: 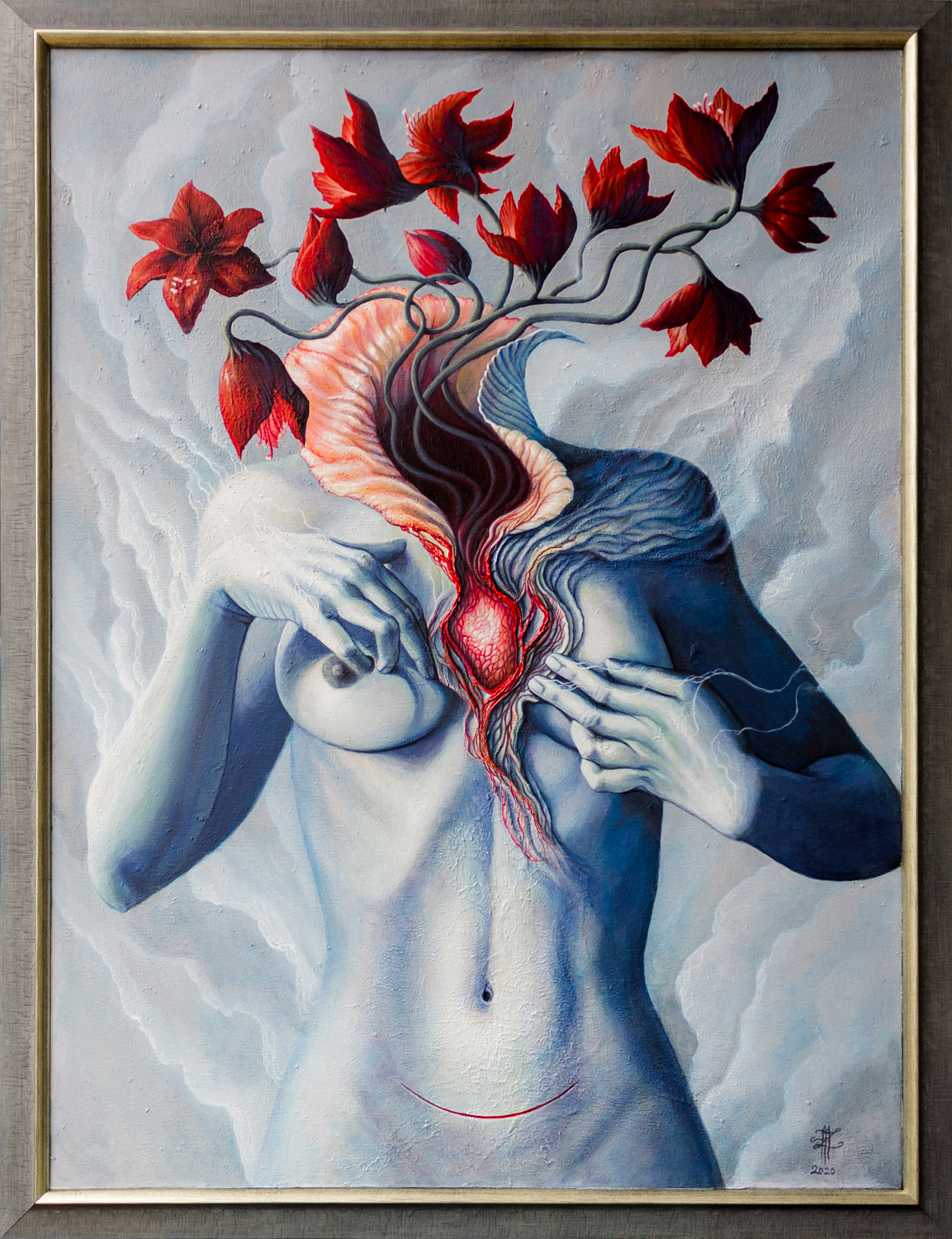 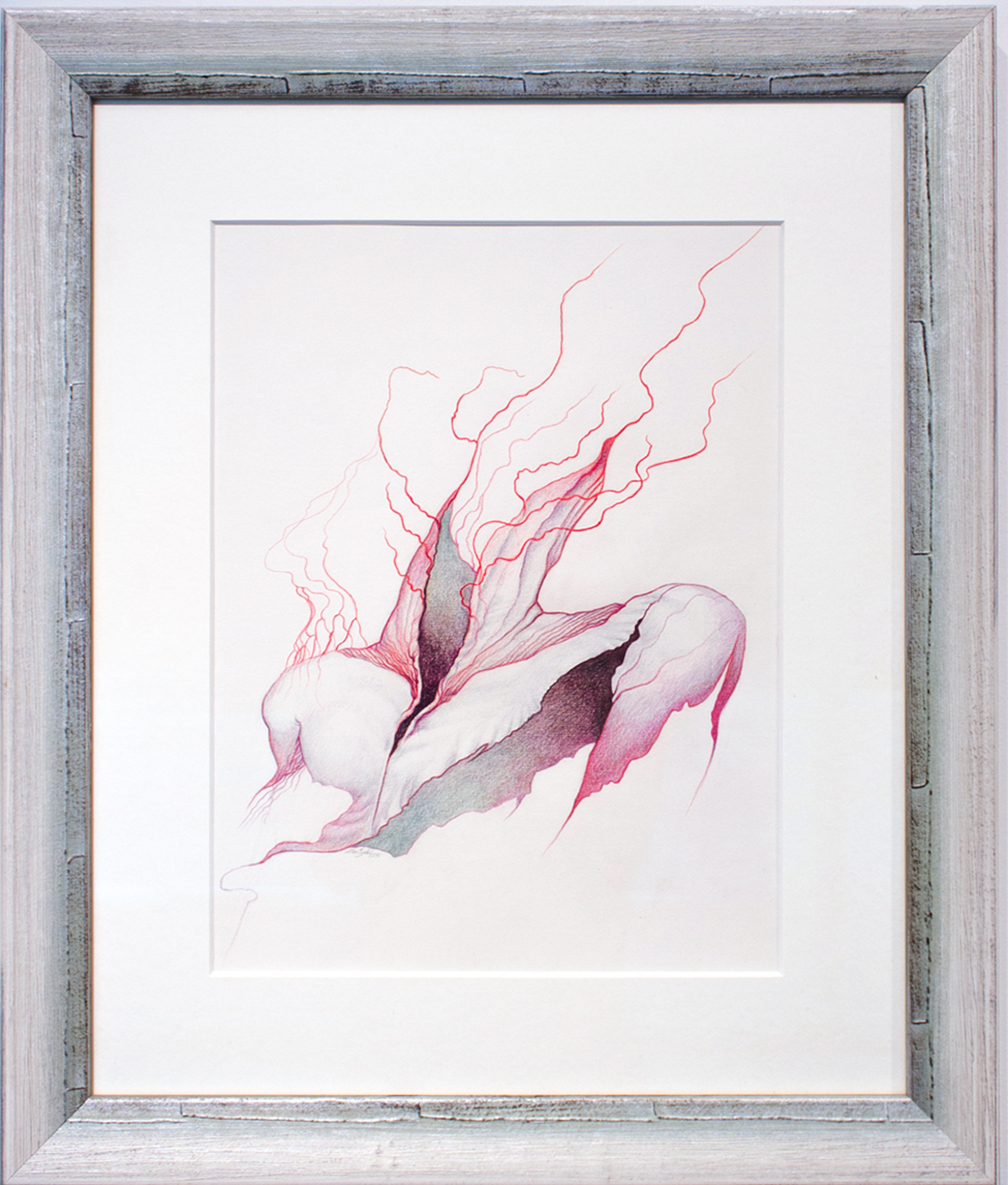 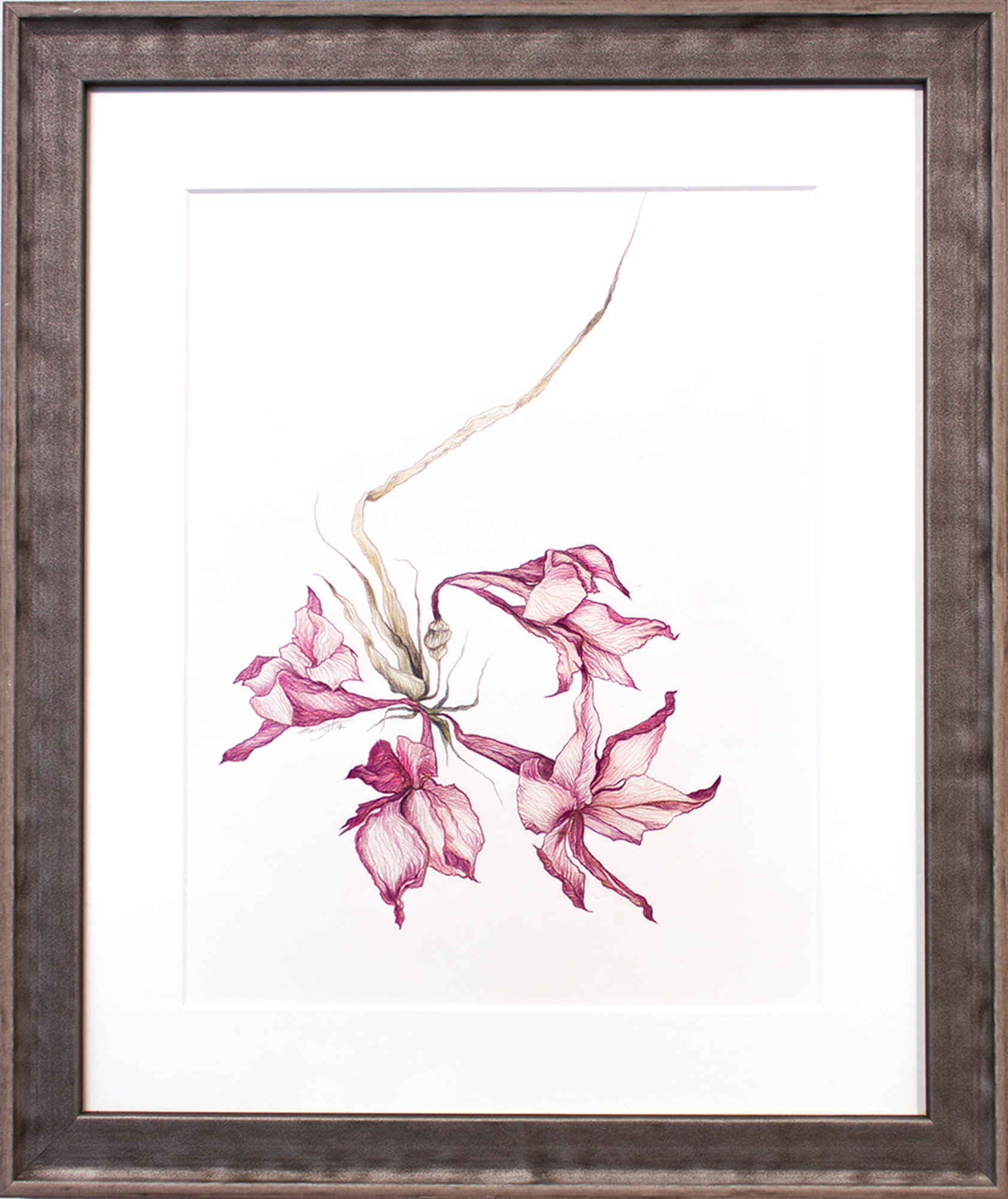 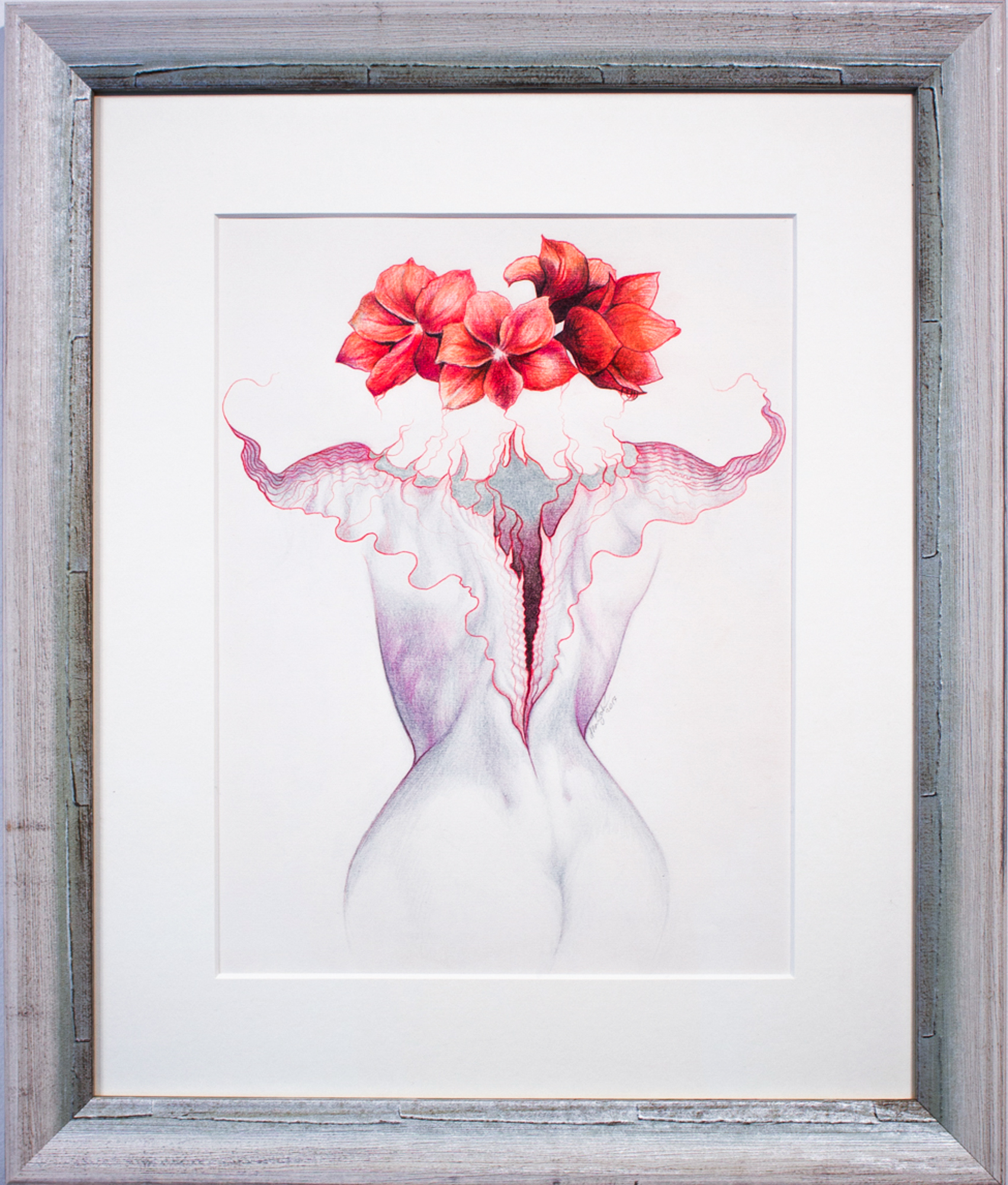 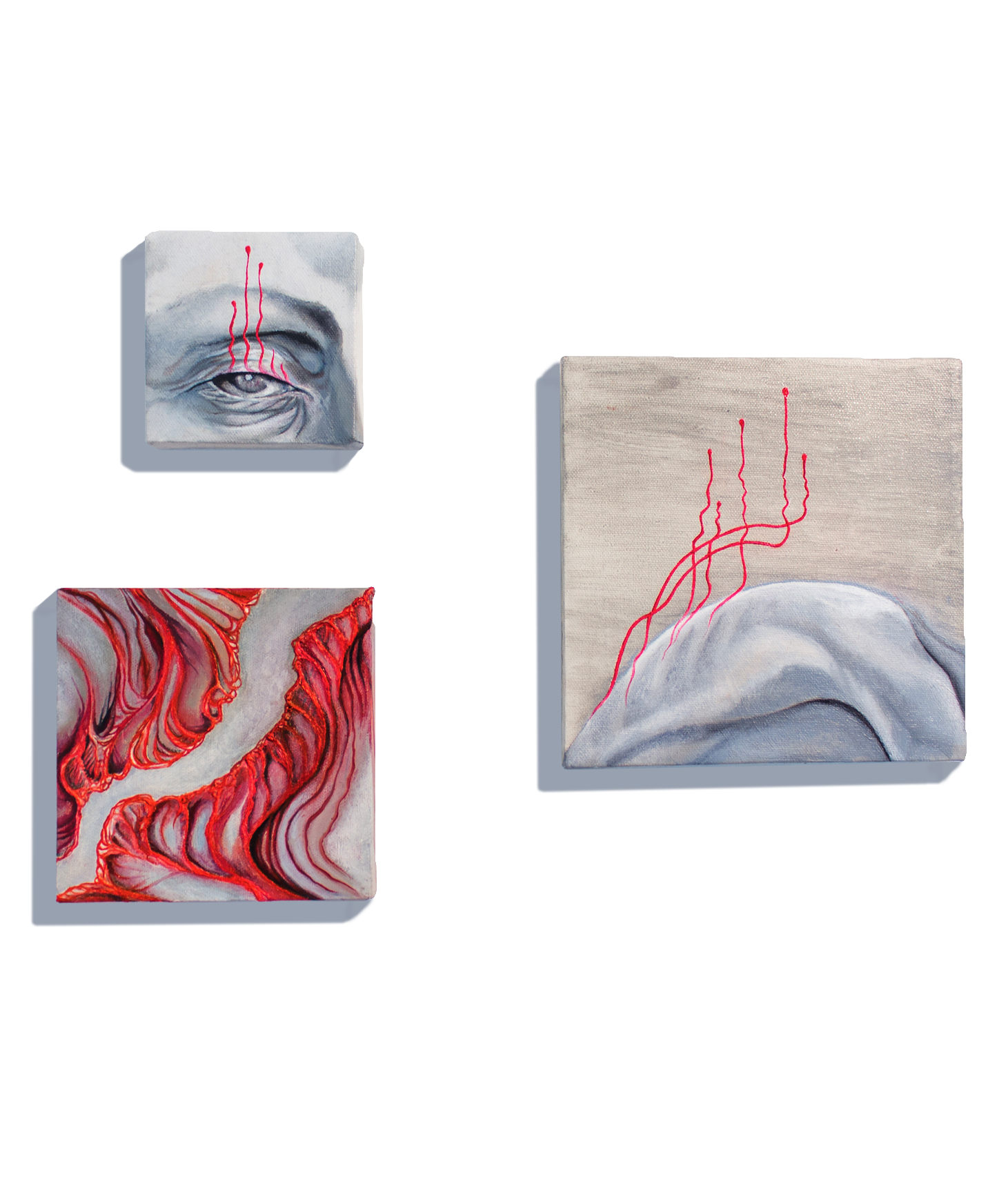 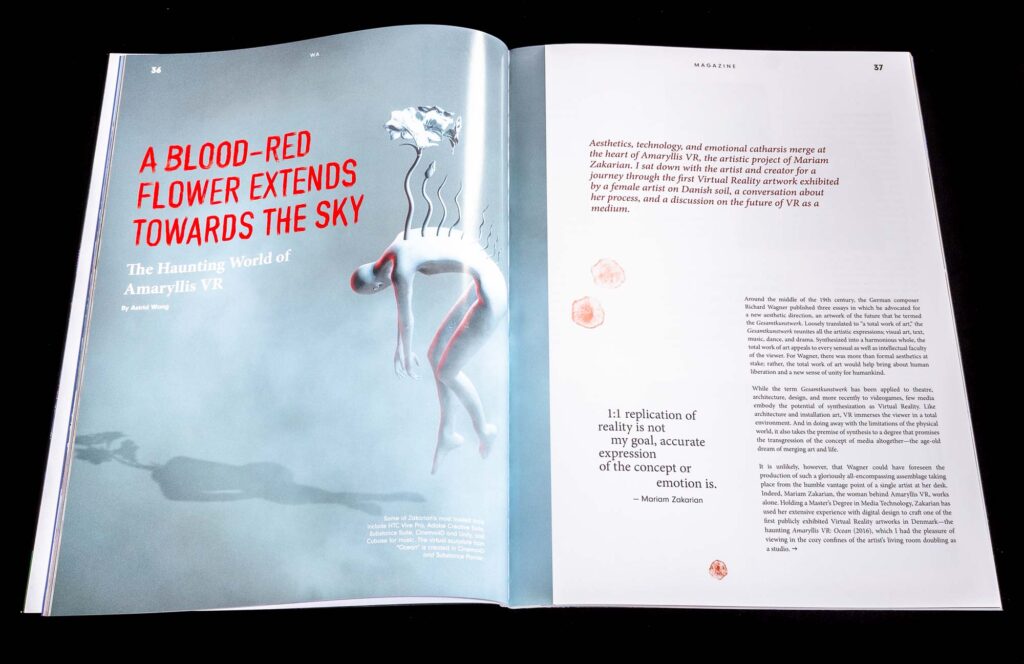 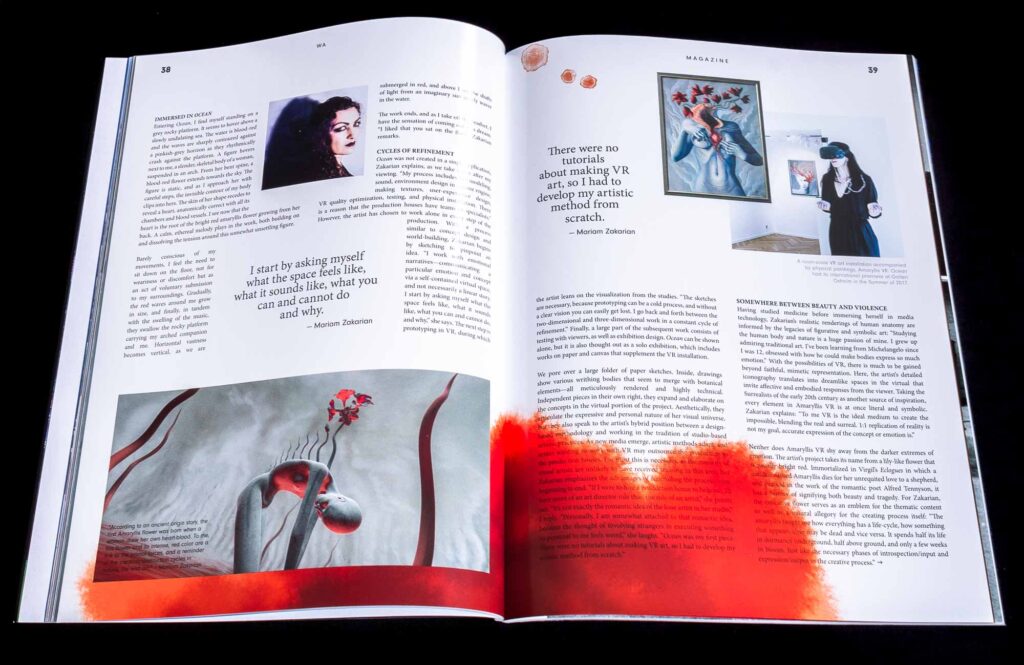 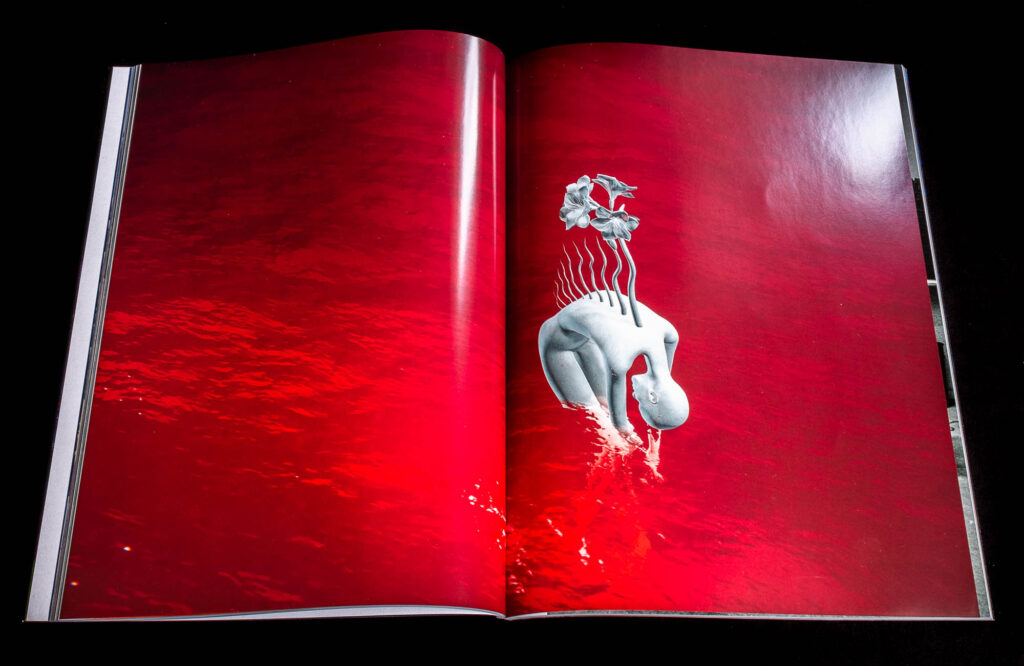 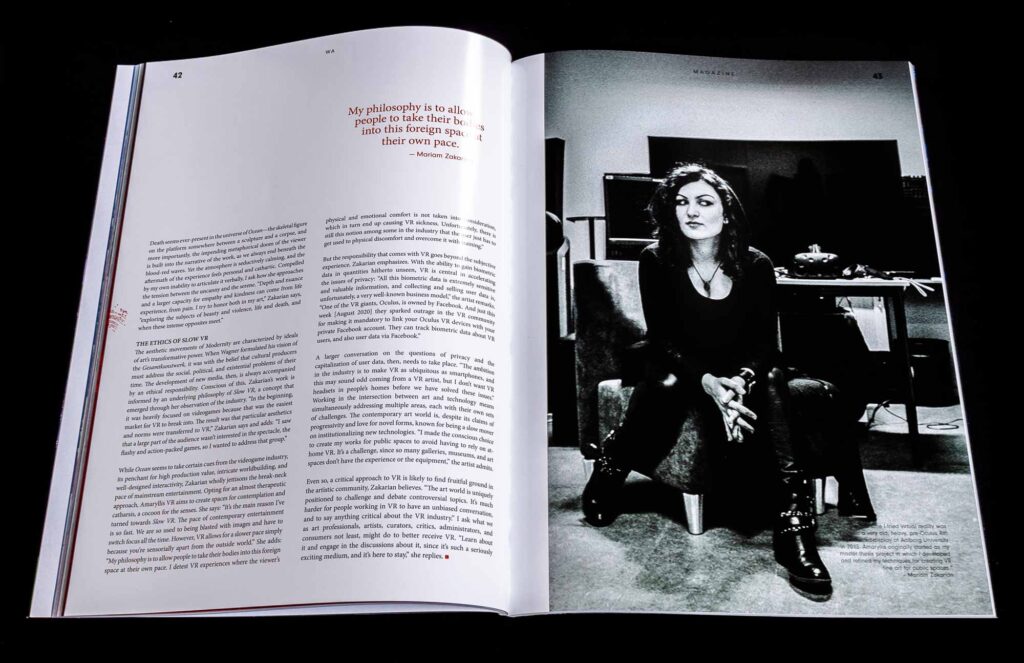 "A blood-red flower extends towards the sky: The haunting world of Amaryllis VR" In print, in English

"Defining Art and Ethics in VR: An Interview with Mariam Zakarian of Amaryllis VR" Online, in English

Artist on Artist -with Denis Semionov, 2018

"Mariam Zakarian: With VR art people can visit the world in my head instead of looking at it through a window" Online, in English & Russian

For details and high quality, web-friendly images, you are welcome to download the presskit (.zip file). Larger sizes and print-friendly images can be sent upon request. If you have an HTC Vive setup and wish to review the piece, a screening version can be provided upon request. For additional information, please feel free to get in touch via the Contact page at the bottom of this website. 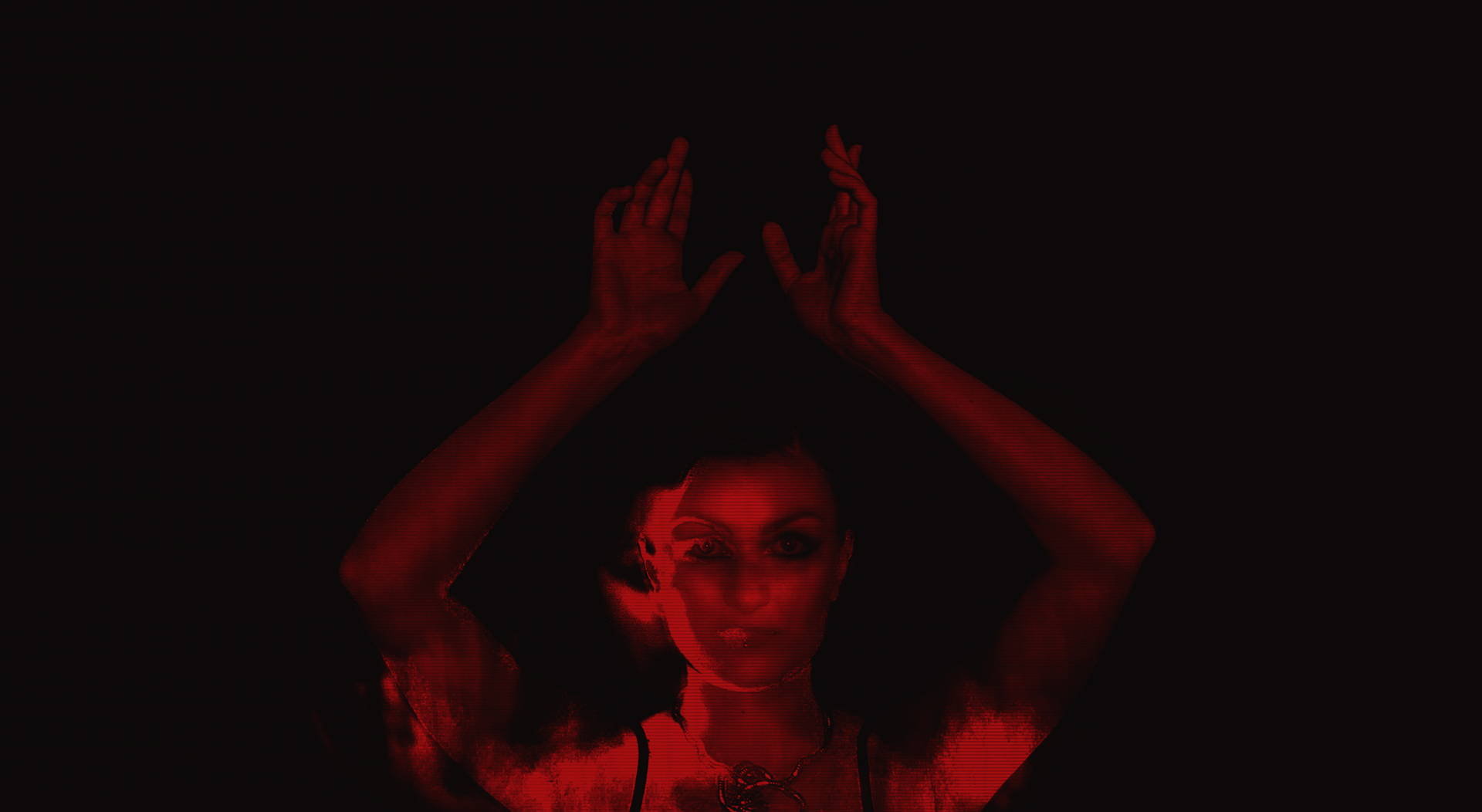 "I began Amaryllis in the early months of 2016 following a particularly harsh winter carrying severance, estrangement and emotional cataclysm in my personal and professional lives. These events demanded pause, redefinition and nursing back to health the will to create, the will to connect, the will to share. It is in my nature to go back to the basics when the abyss calls my name; to ground myself in craft and creation. To give the reins to the part of me that never descended the mountain, never came out from the woods, but ventured instead deeper into the wilderness. At its core, this project is a communion with nature through the use of cutting edge digital technology and I seek to unite the polar opposites of natural and artificial. I explore archetypes, metaphors and rituals around the image of the blood-red flower, which represents the cyclical interdependence between life and death. Because of its personal nature, I embarked on this project alone, learning my chosen tools and technology as I go, and I create all elements of all pieces myself, without involving any external production teams or persons. Although Amaryllis uses the fundamentally immaterial medium of virtual reality, each choice and each little visual piece starts with traditional art tools. The friction of pencils against paper, the layering of paint, the conversation between musical notes, the voice and its ghosts. In Amaryllis I unite these different formats and force them to breathe side by side in virtual reality. "

Mariam Zakarian is a Danish-Armenian multidisciplinary visual artist based in Copenhagen, working with classical drawing, painting, photography and film, cutting edge digital technology as well as performances and installations. She is autodidactic and creates her VR art pieces solo from start to finish -a process involving 3D modeling, animation and music composition.
Zakarian's artistic roots are in figurative, representational genres infused with the strange and surreal, brimming with visual metaphors and carefully constructed layers of symbolism. She is the creator of one of the first Danish VR artworks, and has worked with the medium since 2014.
She holds an M.Sc. in Media Technology, specializing in VR art, and she occasionally shares her knowledge, techniques and discoveries at international festivals and conferences, discussing the relationships between art, artmaking and the artificial, as well as the importance of considering the human aspects when creating the technology of the future.

Amaryllis VR is exhibited at conferences, festivals and galleries.
If you are interested in reviewing Amaryllis VR,
or booking the installation for your event or venue,
please apply for a license:

For booking exhibitions, talks and workshops about VR
or other inquiries please use the contact form below.
Follow Amaryllis VR on social media for news and opportunities: 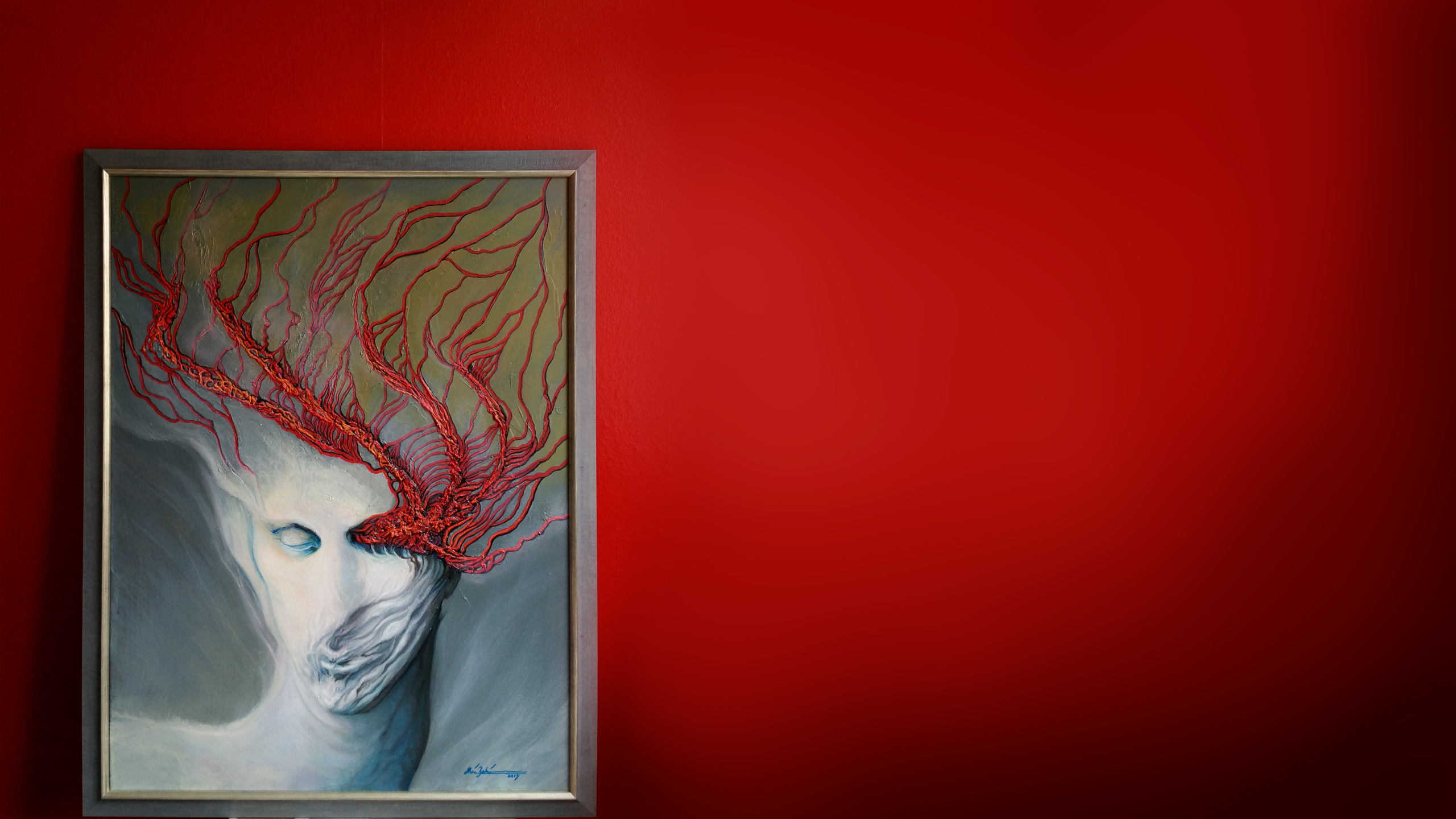 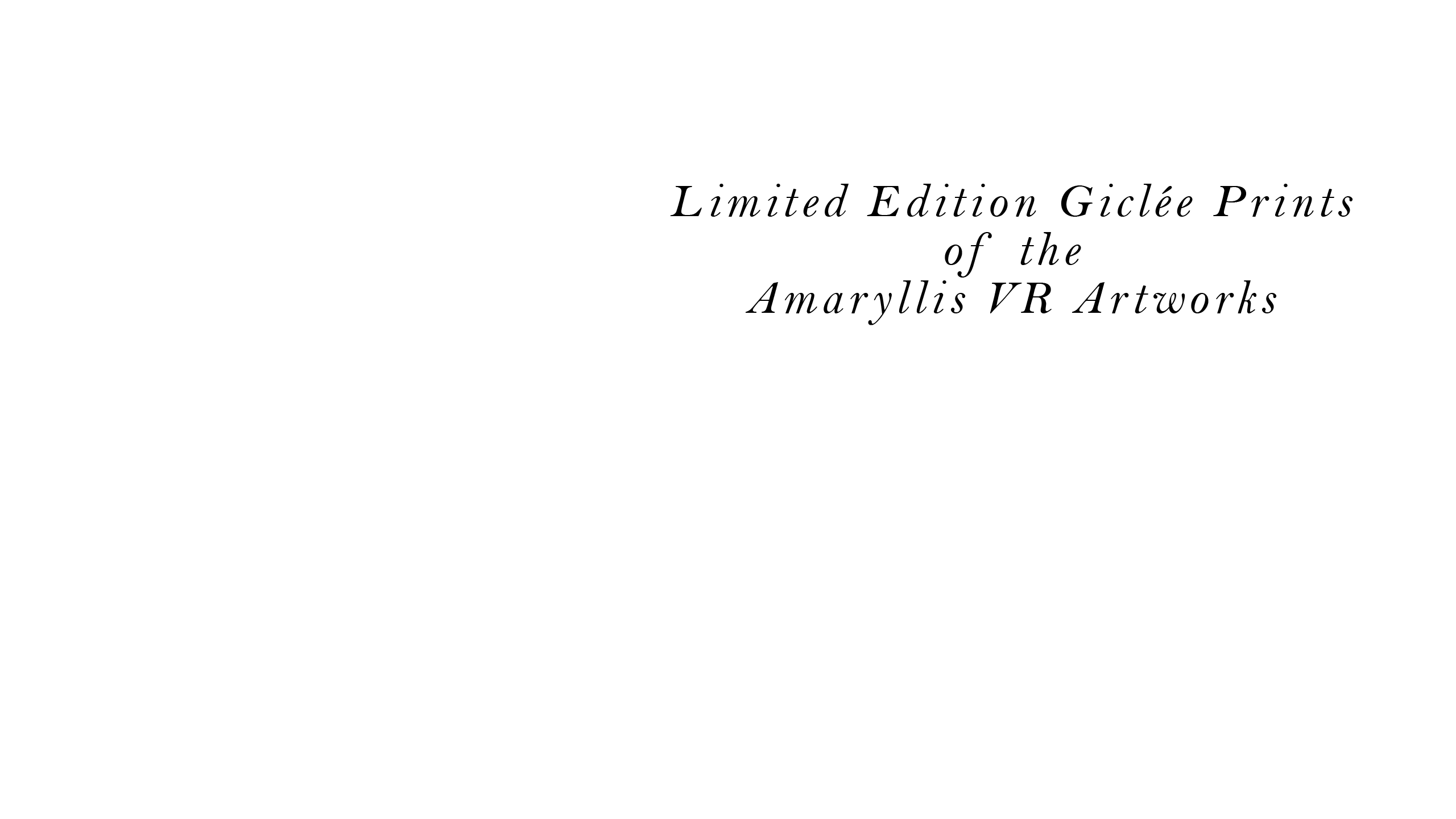